In 2019, Everactive was engaged by a global food & beverage manufacturer that generates more than $35 billion in annual revenue to help modernize one of its newest plants in Topeka, Kansas.

Like most food & beverage manufacturers, this customer utilizes steam in the production of several product lines.  Ensuring the smooth operation of its steam system is an important aspect of its maintenance strategy due to the  system’s potential impact on the plant’s overall operating costs; a poorly functioning steam system can significantly  reduce uptime, energy efficiency, and the safety profile of a given plant. With steam trap failure representing one of  the highest risks to a steam system, maintenance of these mechanical relief devices is of paramount importance.

Although the customer followed the best practices for traditional steam trap maintenance—annual manual  inspections of each trap—it began to understand the limitations of this approach. Indeed, even if performed  thoroughly, this spot-check approach can be problematic:

Steam traps fail too often! At the Department of Energy 15% – 30% failure rate, once-per-year inspections  result in long uninspected periods, during which many traps are likely to fail. A trap could fail the day after a routine  inspection and waste energy—or expose the plant to catastrophic safety of downtime issues—for almost a full year.

Steam traps are scattered in hard-to-reach places! With large numbers of traps spread out in some of the  most inaccessible areas of a plant, annual inspection can represent a significant labor cost, especially for those  facilities trying to squeeze the most of maintenance time and resources.

As part of its Smart Factory transformation, the customer sought a cost-effective solution that could identify trap  failure in real-time to not only reduce the risk and losses during those long periods between inspections, but also  eliminate the need for any unnecessary manual rounds.

Using its patented batteryless wireless sensing technology, Everactive’s Steam Trap Monitoring (STM) offered the most compelling answer to the customer’s problem.  With easy-to-install sensors, Everactive continuously streams steam trap data to its cloud portal, offering customers steam trap insight—failure alerts and a running snapshot of system health—for an affordable annual fee without any upfront cost.  Armed with real-time visibility, the customer can optimize maintenance resources and only deploy staff when and where they are needed to address trap issues.

Moreover, because Everactive sensors operate entirely off low levels of harvested energy and do not require batteries, the customer realizes even greater maintenance savings.  With competing battery-powered monitoring devices, users would still be forced to make unnecessary trips to each trap—not to address trap failure, but to replace a battery.  In essence, with battery-powered sensors, technology designed to reduce maintenance costs actually adds maintenance events to a facility’s schedule, thereby eroding some, if not all, of any savings.

The customer outfitted all 121 of its plant’s steam traps with Everactive STM. In addition to a fully tagged trap survey at install, the customer now received data every 60 seconds from each and every steam trap.  In the Evercloud analytics portal, the customer can readily see the operating state of each trap and is alerted to failing traps instantaneously so that swift action can be taken to avoid losses. 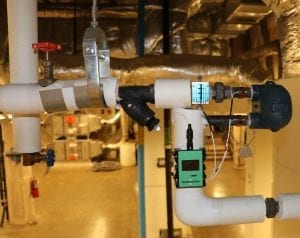 With 100% coverage of its steam system, the customer recouped its investment in less than three months. During this time, Everactive identified 41 steam trap failures of varying degrees of energy loss. The four major offenders were quickly replaced, resulting in an immediate 7x return on the Everactive service fee and justifying the continued value of monitoring over the coming years. In addition to the financial savings, the optimized response schedules from real-time monitoring can help the plant save over 20,000 metric tons of CO₂ emissions each year; by fixing literal holes in the steam system, the facility can avoid the excess emissions from over-producing at the boiler to compensate for wasted steam.

As the customer continues to modernize, its remote steam trap monitoring solution not only provides a competitive advantage, but also serves as a model for remotely monitoring a range of assets throughout this facility and beyond.