Everactive’s mission is to improve the quality and efficiency of peoples’ lives by enabling the next computing revolution with self-powered systems.  That vision hinges on two important concepts.  First, that a flood of new data sets from our physical world can be used to enrich how we work and live.  Second, that said flood of new data can be best obtained by removing batteries, which have long been a rate-limiter to the widespread deployment of wireless sensor networks.

Improve the quality and efficiency of people’s lives …

With respect to this first concept, we focus on taking products to market that generate a measurable return to our customers.  Rather than develop technology for technology’s sake, we believe that it is critical to use our unique, scalable, self-powered sensor networks to solve real-world problems.  While that typically includes demonstrating a dollar savings, it almost always also includes an environmental component.  Real-time monitoring of industrial equipment and infrastructure can dramatically improve efficiency; depending on the application, this can produce significant energy and emissions savings.

by enabling the next computing revolution with self-powered systems

With respect to this second concept, we often talk about the sheer logistical impossibility and financial burden of batteries, but batteries also introduce an unsustainable environmental cost.  Indeed, if we imagine the trillion-sensor IoT long predicted by analysts and assigned each of those sensors a generous 10-year battery, we’d need to replace 274,000,000 batteries each and every day just to keep the network afloat.  With more realistic 3-year battery lifetimes, we’re looking at closer to 1 BILLION battery replacements per day—that’s 333,224,000,000 each year!  That doesn’t sound like a system whose primary purpose is efficiency.  Such a turnover cycle would represent an environmental catastrophe—placing a severe strain on the planet’s limited natural resources and sending millions of tons of unrecycled material into the world’s landfills.

When you remove the battery, you not only maximize the vast potential of the Internet of Things, but also do so in the most sustainable and environmentally friendly way possible.

To achieve the goal of removing batteries from wireless IoT devices, Everactive has dramatically lowered the power requirements of the electronics such that our devices can operate entirely off low levels of harvested energy.  With circuits that require up to 1,000x less power than competing solutions, we can use small form-factor energy harvesters (remember your solar-powered calculator from grade school?) to continuously and indefinitely operate wireless sensor devices.  With trace amounts of dim indoor light or small temperature differentials, Everactive streams real-time data to the cloud, where it is transformed into actionable insights for customer consumption.

Self-powered devices offer a “set-and-forget” approach that changes the calculus about sensor deployments.  Without having to worry about battery maintenance, Everactive sensors can be scattered at a massive scale.  That means a whole lot more data using a whole lot less energy.

To put this in perspective, we looked at how much energy it has taken Everactive to measure, process, and transmit data during the past two years of shipping product.  To date, we’ve transmitted in excess of 730,000,000 data packets—a number that is growing faster and faster as we deploy more and more sensors—using a mere 1.6 kWh.  Now, if you’re not intimately familiar with a kWh, let’s put that into perspective using some common household appliances. 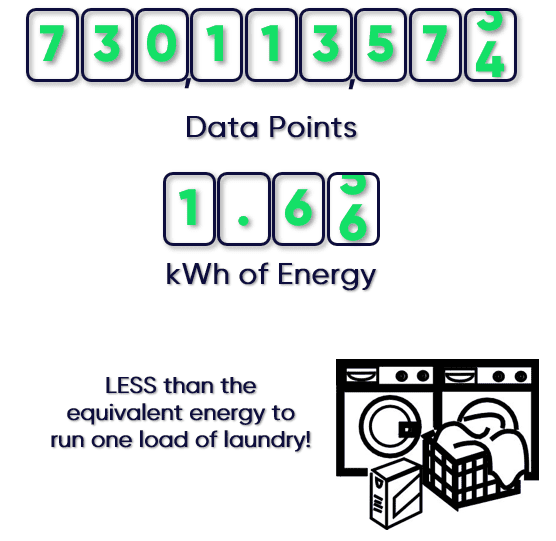 So, we’ve measured and transmitted nearly three-quarters of a billion physical-world data points using less energy than it takes to do a load of laundry or to run your window AC unit for 30 minutes, but what have we done with that data?  Turns out, quite a lot!

Over the past couple years, Everactive has shipped thousands of sensors to large manufacturing companies and other facilities to monitor steam systems and rotating machinery.  With each of those products, we’re able to demonstrate significant cost savings to customers through more efficient use of maintenance resources and through more efficient use of energy.  Let’s take a look at an example.

Steam systems are used around the planet as a source of energy to power processes (as is the case in many process manufacturing industries) and to heat & cool environments (as is the case in district energy systems throughout major metro areas and large campuses).  All steam systems are outfitted with relief valves to eject unwanted condensate from the system.  These valves are called steam traps.  As mechanical devices, steam traps have finite lives and maintain failure rates on the order of 15-30%.  When traps fail in an “open” position, it’s like leaving your AC on in the summer with the windows open.  This not only results in wasted energy, but also in overproduction of steam at the boiler to compensate for the hole in the system.  That means excess carbon emissions.  If a steam system does not have a condensate recovery system, that also means significant water waste.

With a fast-growing install base of a few thousand steam trap sensors (our STM product line), we estimate a meaningful annual energy and emissions savings across all customers:

By applying our energy efficient, batteryless sensors in other applications, we can continue to generate a significant environmental impact.  Our sensors can be used to improve electric motor efficiency throughout industrial plants—the largest consumer of electricity—to reduce electricity usage.  Data from our real-time sensors can indicate faulty pressure relief valves and the source of flaring events to curb phantom emissions and reduce flaring duration in refineries.  Methane sensors can be utilized to quickly identify gas leaks at well pads to reduce emissions and improve worker safety.

The opportunities to leverage self-sustaining sensors to produce environmental benefits are endless.  As Everactive continues to grow, we are eager to make an even bigger impact with new and existing products.  Cheers to Earth Day 2021 #restoreourearth!